a 501(c)3 Corporation dedicated to exploring life on earth, in the oceans and space. 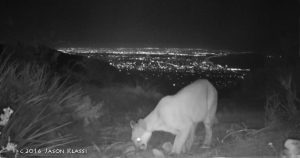 “I’ve always had a love for adventure, ever since growing up along the Shellrock River in Iowa.  For the past 30 years I’ve been exploring the local Santa Monica Mountains, from the tall redwood trees tucked away in the canyons above Sunset Boulevard to the chaparral of the 3000 foot high arid ridges above the Pacific Ocean.

More and more I’ve come to appreciate the amazing wild creatures that live here even though I have only personally encountered a few of them on very special occasions.

A few years ago, I had a rare and calm face-to-face encounter with a mountain lion while on a hike in my local Santa Monica Mountains. We stared at each other for about a minute less than 20 feet apart. As I slowly reached for my cell phone to take a picture he casually sauntered off uninterested with my human desire to capture the moment. Many people were skeptical of my story dismissing it as a bobcat, coyote or an outright fabrication. But I knew what I saw and I was captivated by it.

About six months ago I started noticing incredible mountain lion trail cam videos posted on Facebook by masters like Johanna Turner, Denis Callet, Robert Martinez, David Neils and of course Steve Winter. Their footage inspired me to buy my first trail cam and try to capture on film what I now knew roamed my local hiking trails.

In the height of this past summer’s drought, I placed my first trail cam by one of the remaining animal watering holes near the spot where I had my initial encounter with a lion a few years ago. Within a few weeks I had a nice bobcat image and a close-up of the two front legs of a mountain lion. A month later I was teased with a 3 second video clip of a mountain lion’s collared neck, torso and tail but no face. Jeff Sikich of the National Park Service confirmed that these were probably two different lions — P27 and another unknown lion.

With renewed determination, I placed my trail cam further back in this same setting hoping to get the entire mysterious creature on camera if it passed this way again. I waited, checked images and replaced batteries for 4 more months.

Finally on New Year’s Eve, I went to check my camera and there it was — the entire beautiful mountain lion known as P27 standing in profile, sniffing the air and gracefully leaping by the camera to continue his solitary travels. Needless to say, I was elated. My mouth dropped open, my eyes widened and I raised my hands to the sky in appreciation of Mother Nature’s gift to us all. These magnificent elusive creatures are there but you hardly ever see one.  – Jason Klassi, founder